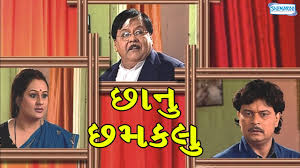 Synopsis: Dhirajlal lives happily with his second wife and his sister. He wants to have a kid but his wife cannot conceive a kid even after 3 years of their marriage. Jeweller Dhirajlal Sanghvi fears that he will be kidnapped and killed. Kidnapping and murder stories in the newspaper adds fuel to his fears. Rumours spread in the diamond market that a kidnapping attempt injured Dhirajlal. True to his fears, Dhirajlal Sanghvi gets kidnapped. An attempt to escape from the kidnapper results in the death of the kidnapper. Dhirajlal fears a lot and keeps bodyguard for himself. He starts getting letters, calls and some box from underworld don from Dubai about the death of their fellow mate. What will happen to Dhirajlal? Will he overcome his fear of getting kidnapped? He is so frustrated and makes a complaint to the police on the advice of his bodyguard – Captain. Is their someone’s hidden plan behind any family member or there is some actual underworld don behind Dhirajlal’s mental unstability. The play features stalwarts from the Gujarati theater industry. Watch this interesting play to know the suspense story.
Cast: Arvind Vekariya, Nitin Trivedi, Meera Acharya, Vimal Upadhyay, Ketan Trivedi, Dilip Somaiya
Producer: Dilip Somaiya
Director: Arvind Vekaraiya
Posted by Sids at 14:05