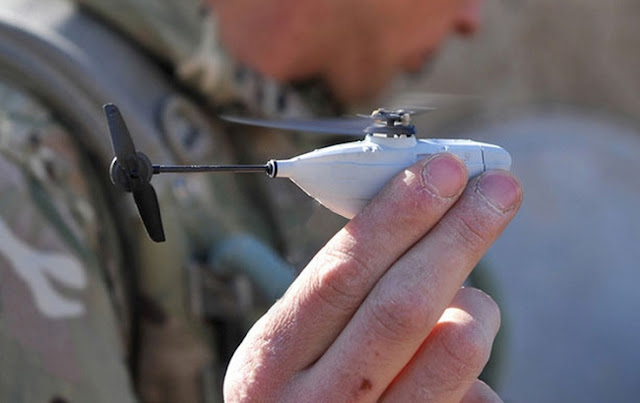 A small remote controlled helicopter that looks like a toy you’ll probably buy for your son or nephew has become a vital instrument in the British Army’s fight versus the Taliban. Known as the Black Hornet, this tiny drone is programmed to fly into hostile areas for surveillance purposes.

The Black Hornet Nano Unmanned Aircraft System is the brainchild of Marlborough Communications, a defense contractor based in Norwaythat has been commissioned by Britain to provide their military with 160 drone units. The Black Hornet’s 10cm x 2.5cm size might seem like a child’s toy, but the three minuscule cameras integrated in its body certainly packs a punch. This cutting-edge spy copter can relay full motion videos and stills to its handlers, providing crucial information about hidden threats to troops on the ground, thus ensuring their safety. The Black Hornet easily fits in a person’s hand and weighs about half an ounce, including the rechargeable batteries.

So far, Britain’s Ministry of Defense is happy with the performance of the Black Hornet, a sentiment that has been seconded by the Brigade Reconnaissance Force that’s currently based at Afghanistan. A Ministry insider has even admitted that the drones have been a good investment and has prompted the government to consider allotting a bigger budget for the development of similar technology.
Posted by Sids at 22:00