Beyonce's Gold Nails Cost £56 For Each 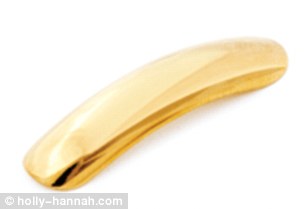 They don't call her Queen B for nothing. She's just wrapped up one of the biggest performances of her career at the Super Bowl, and now she's ready to take on the world.
Dressed up to promote her Mrs. Carter Show world tour the 31-year-old songstress looks every inch the queen of pop with a billowing Victorian updo topped with a crown and golden royal-looking garb.
And it seems there was no expense spared for the stunning shots, with even her gold-tipped nails costing a staggering £560 - that's £56 for each nail. 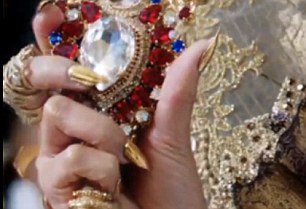 The golden nails were designed by H&H nails, a company set up by a make-up artist and jewellery designer duo. Make up artist Holly Silius and jewellery designer Hannah Warner joined their professions and have pushed the boundaries to create a range of 2D and 3D metal nails with famous fans such as Rhianna, Beth Ditto, Lianne Le Havas and Jaime Winstone.
The create pair use their personal industry knowledge and combine it to create the quirky designs.
Hannah's knowledge of metals and the production processes and Holly's knowledge of design and expertise in theatrical make up for stage, music and screen proves a strong, imaginative combination. 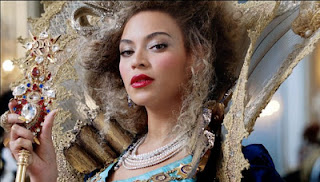 The nails range in price from £31 to £94 and the designs include classic gold and silver styles as well as more daring designs with 3D ants, wild thistles, skulls and spiderwebs. Beyonce matched hers with her jewel adorned dress in the new O2 Priority Ad, which promotes the UK leg of her tour. 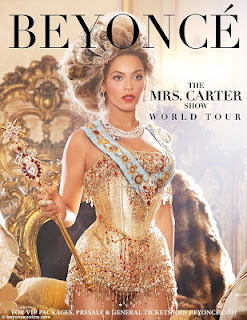 The clip opens to a drumming tune as a pair of ladies in waiting dress the singer in a wildly over-the-top gold beaded bodice And the camera zooms in on her neck sash, which features a bedazzled inset image of her husband, rapper Jay-Z aka Shawn Carter.
She is then fitted with a coronet and a sceptre before marching through a set of opening doors. 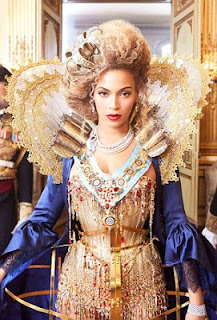 'I may have an announcement after the performance': Beyonce released the dates for her world tour just hours after her Super Bowl performance on Sunday night 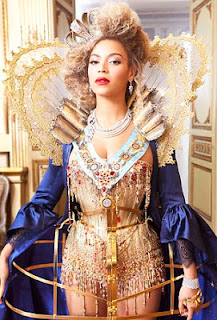 
Her full outfit is revealed, as we see her strutting through her royal chambers in over-the knee red boots and a long royal blue cape. The Crazy in Love singer is flanked by her touring crew, including dancers, Les Twins, as dancing guards who sway about to tunes played by a DJ dressed as a court jester. Directed by Grammy award winning director Jonas Akerlund, the spectacular ad features exclusive new official footage of Beyoncé. The ad also includes highly anticipated new music from the star.  Akerlund said: 'I feel proud to have been a part of this fantastic campaign and will remember it as something unique and fun. The Houston-born singer will kick off in Belgrade on April 15 and make eight stops in the UK and Ireland between April 29 and May 7. 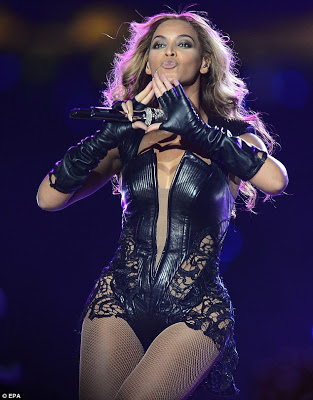 Beyonce performed in front of millions at the Super Bowl 2013 half-time show
Posted by Sids at 10:18