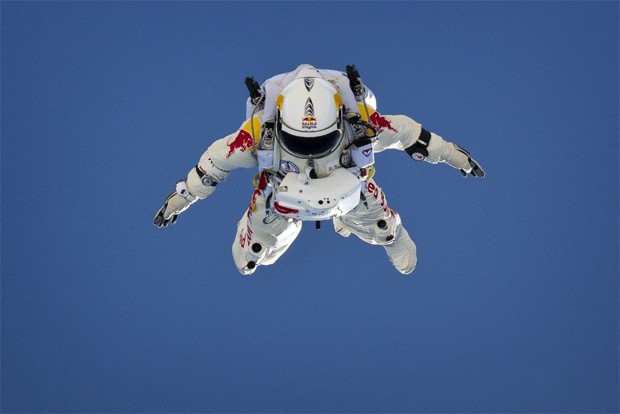 On a playful tone, jumping can bring a certain rush of excitement to the bloodstream and give a sense of inexplicable freedom. When done with a mission in mind, it can also pose some threats and dangers. Whatever is the purpose behind, Felix Baumgartner seems unfettered and determined to set a new world record by doing an extreme jumping attempt.

The project dubbed as “Stratos”, fearless Felix will start his journey on the edge of space that is 23 miles up from the earth. He’d be clad in just a pressurized suit and a “working” parachute. A tiny capsule would help him ascend into the heavens and it will be pulled up by perhaps one of the biggest hot air balloons ever created.

The giant balloon filled with helium needs at least three hours to reach 23 miles up from the earth. Once it reaches 120,000 feet, Felix would be leaping from the capsule that is clinging beneath the balloon. The descent will take him 20 minutes and his speed is measured to reach more than 690mph. Such speed would entail huge pressure and could result to blood boiling, eyeballs popping out, and brain bursting. That’s why he would be wearing a special pressure suit that can tolerate temperatures measuring at -70 degrees Celsius. Even the parachute is packed with oxygen that can last up to 20 minutes. This is important since the parachute will only open when he’s less than 5,000ft from the ground.

Felix has been “jumping” out of planes and skyscrapers for several years now. His strange penchant for jumping enabled him to cross the English Channel, freefall off in Rio’s Christ statue, and leap head-first in a Croatian cave that is 620ft deep.

If everything runs smoothly, the jumping attempt will have to be over in a matter of almost three hours. The biggest danger, however, lies in the fact that the balloon could rupture shortly after take-off. When that happens, Felix wouldn’t have enough time to open his hatch and escape. That means the capsule would be crashing down the ground with him trapped inside.

At any rate, Felix and the rest of the team had been preparing for this attempt for the last seven years. With two successful test runs in their record, the team is ready for a launch date on October 8, which could be marked in everyone’s calendar as “world jumping day.”