Previous 14 Most Beautiful Jellyfish on Earth 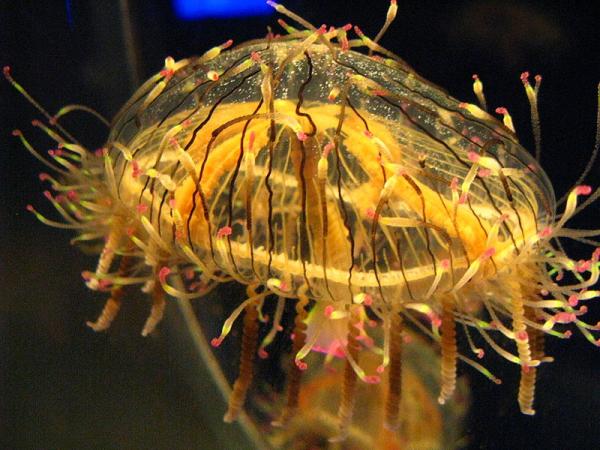 Flower hat jellyfish
Jellyfish have always drawn gasps at their beauty - and at times their venom which range from mild, to enough to kill a man. Found in every ocean and in some freshwater lakes and rivers, the jellyfish is one of the wonders of marine life. Join me as we look at 14 of the most beautiful! 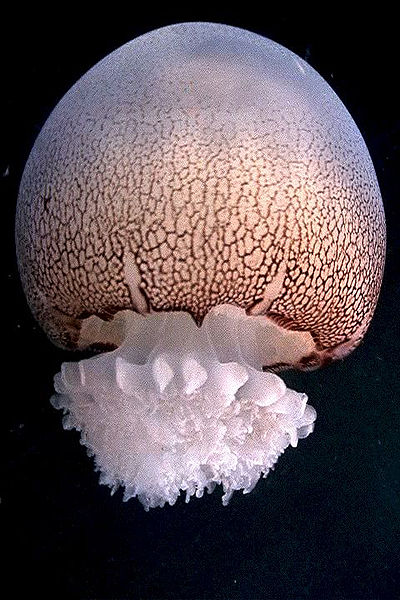 Cannonball Jellyfish
The Cannonball jellyfish lives along the coast from the Eastern Seaboard of the U.S. all the way down to Brazil, named obviously for its shape. One interesting little twist is how it sexually reproduces. It can reproduce asexually but when it does not, it shoots sperm from its mouth to be caught in the mouth of the receiving jellyfish. 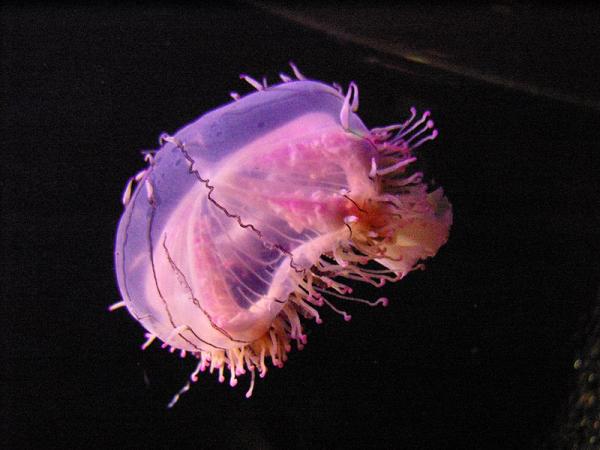 Flower Hat Jellyfish
These curious creatures really do look like spring bonnets made to wear. They are a rare species found off the coast of Brazil, Argentina and Japan. Its tentacles coil up and stick to the rim when they aren't using them, giving rise to the bonnet look. 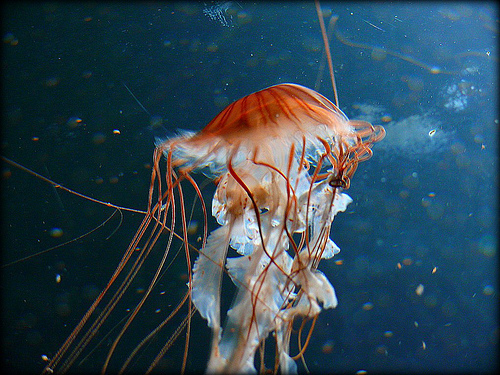 Portuguese Man o'War
A magnificent creature that is so commonly considered a jellyfish I include it here but is actually "a siphonophore, which differ from jellyfish in that they are not actually a single creature, but a colonial organism made up of many minute individuals called zooids" (according to Wikipedia). It has a gas bladder and swims on top of the waves letting the wind and current take it, while the tentacles can hang down 66 feet below. 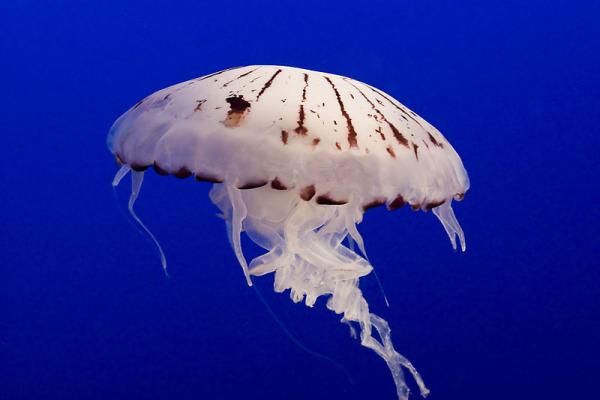 Purple Striped Jellyfish
A species found around Monterrey Bay, not a lot is known about their habits. Most individuals have four frilly oral arms and eight marginal arms. As they vary with age different numbers may be seen. It is a striking jelly with its bands of purple around its bell. A symbiotic crab often lives with it to feed on the parasitic amphipods that live on and damage jellies. 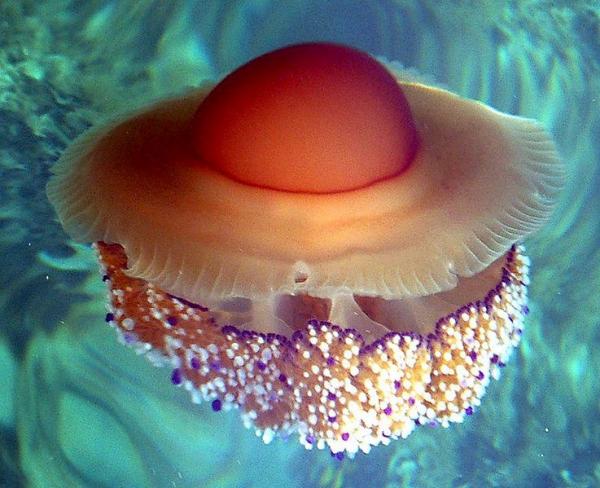 Mediterranean or Fried Egg Jellyfish
This is a really strange but beautiful creature, which looks like a fried or poached egg and lives in the Mediterranean, Adriatic and Aegean seas. It is also one of the few jellies that can locomote on its own, not just relying on current. 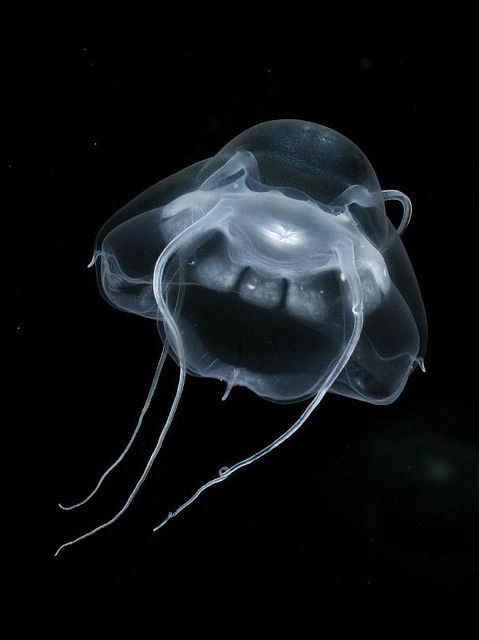 Darth Vader or the Narcomedusae
Found in the Arctic, this is a fairly new discovered species with 4 tentacles and 12 stomach pouches. It swims holding out its poisoned tentacles in front, better to ambush prey. 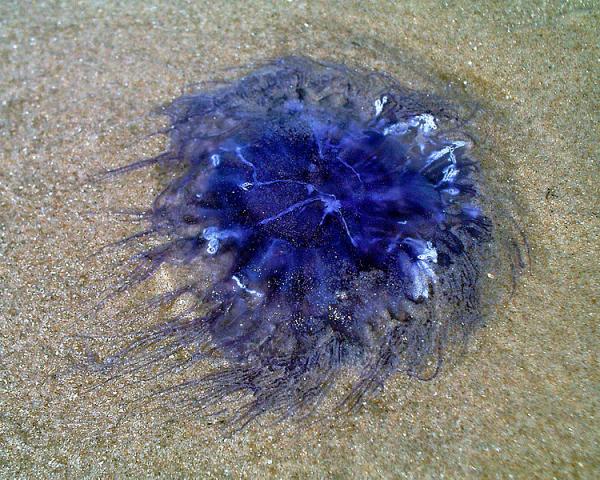 Blue Jellyfish
The blue jellyfish or Cyanea lamarckii is stunning in its color and has stinging tentacles. Found off the coast of Scotland, the North Sea and the Irish Sea, they average 15 cm across and look like bright blue pom poms. 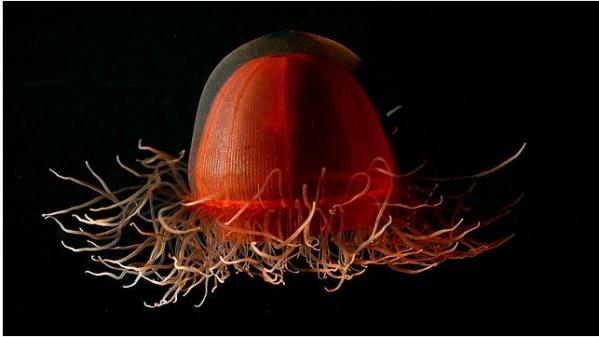 Crossota sp
A gorgeous red medusa that was found in the arctic just off the sea floor during the Hidden Ocean, Arctic 2005 exploration with the NOAA. 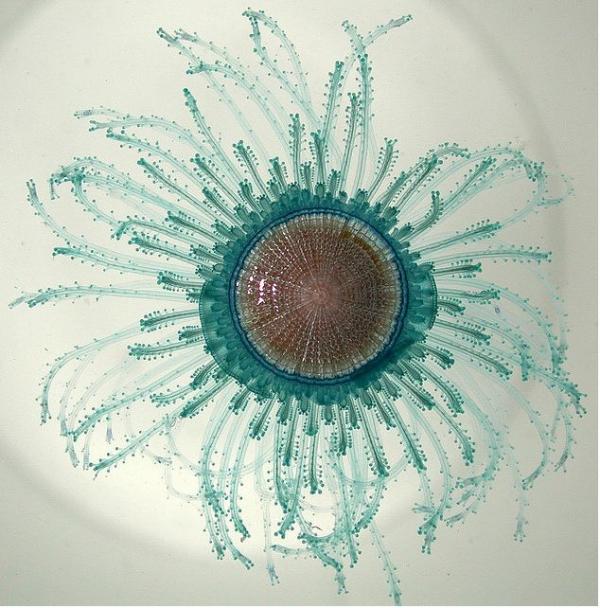 Porpita Porpita
Not quite a jellyfish, this gorgeous creature is commonly known as the Blue Button. It lives on the surface of the ocean and consists of two parts, the hard golden brown float and the hydroid colonies that resemble jellyfish tentacles. It does belong to the same phylum as jellyfish and is often mistaken for one. 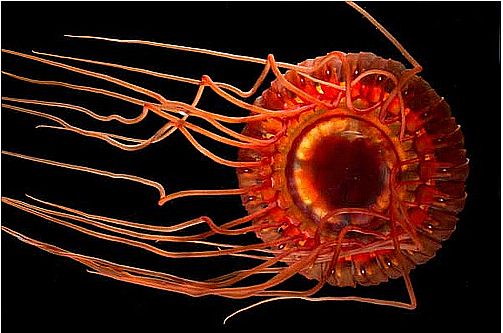 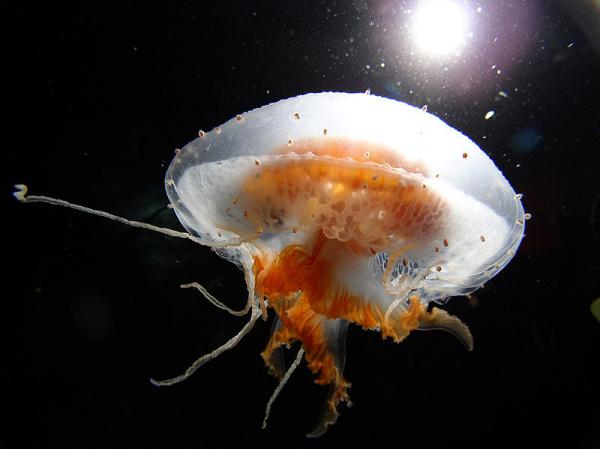 Diplulmaris Antarctica
This gorgeous creature is found in deep waters of Antarctica and has four orange frilled arms as well as white tentacles. The little white dots on the bell of the jellyfish are teeny amphipods that live off jellyfish, sometimes eating it but not in this case. 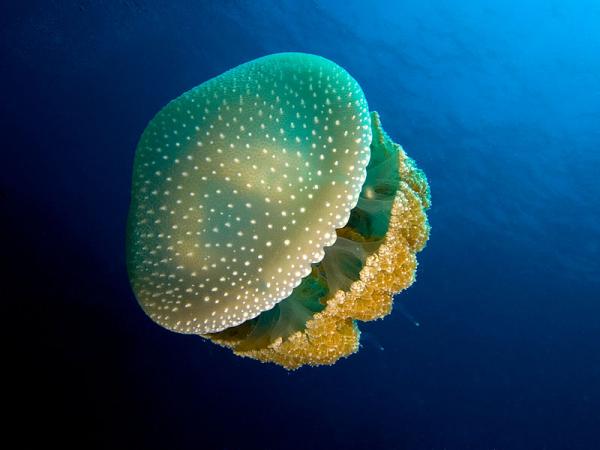 White Spotted Jellyfish
Also called the Australian Spotted Jellyfish, these are native to the Pacific Southwest waters. Fairly large they generally consume snail species but they have become a concern in some areas because of the huge amount of water they filter, digesting plankton that some food fish and other fish need. 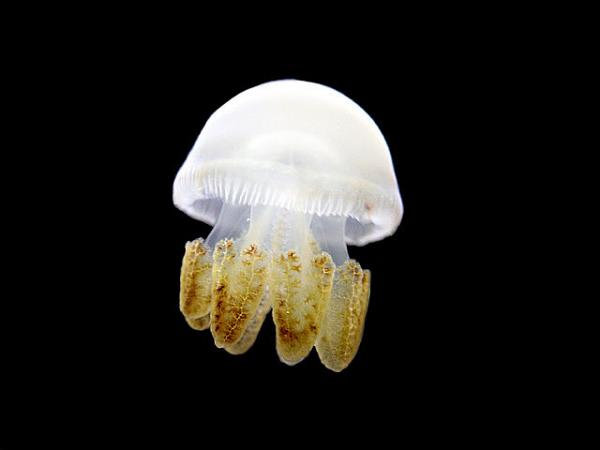 Breede River Jellyfish
An astonishing beauty, this is one of the freshwater hydromedusas and appears in large numbers during summer in the Breede river in Africa. Very little is known about them as they disappears later in the year and have not been given a species name yet. Their mystical white beauty, with golden pedestals make them the winner in this list.
There are more famous jellies, and larger ones like the Lion's Mane, but out of all the ones I have seen, these 14 stood out for their beauty. Some ethereal such as the narcomedusa and diplomaris, some more tangible and brash. One thing's for certain - man's fascination with them won't disappear soon. 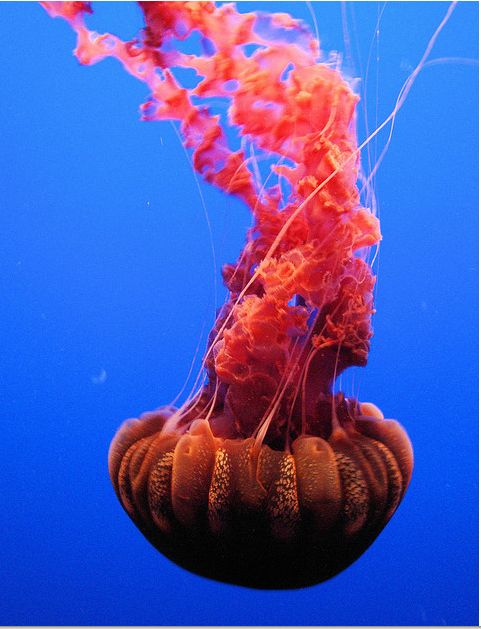 Black Sea Nettle
The Black Sea nettle is a giant jellyfish with a bell as big as 3 feet across and oral arms as long as 20 feet. They are found in Pacific Ocean waters and are carnivorous, eating larvae, plankton and even other jellyfish.
Posted by Sids at 11:24